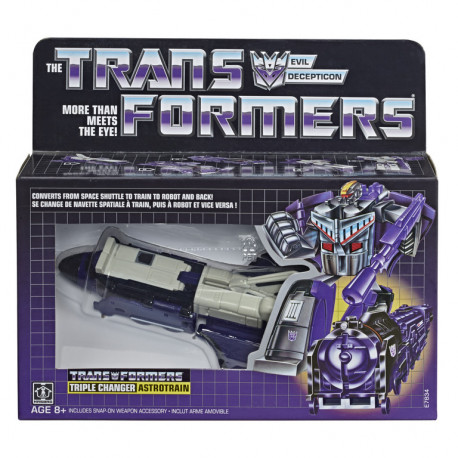 RE-CREATION OF THE ORIGINAL G1 DESIGN: This Vintage G1 Astrotrain figure is inspired by the original 1985 G1 release

TRIPLE CHANGER WITH 2 ALT MODES: Astrotrain toy is a Triple Changer that features classic conversion from space shuttle to train in 6 steps and train to robot in 8 steps

VINTAGE DECORATION AND STICKER DECALS: Astrotrain figure comes with a sheet of foil decals so fans can detail the toy.

Experience the figures that started it all. This Transformers: Vintage G1 Astrotrain figure is designed like the original G1 version -- including figure styling, packaging, and art inspired by the 1985 G1 releases, plus classic tech specs and accessories. (Re)start a vintage Transformers collection with this Astrotrain figure.

Creating confusion is the specialty Astrotrain. As a Triple Changer, can switch from space shuttle to train to robot almost instantaneously. Thrives on foes' panic and fear. Carries powerful ionic displacer rifle.

Astrotrain figure comes with Ionic Displacer Rifle accessory and converts from space shuttle to train in 6 steps and train to robot in 8 steps.

Clip out and save the on-box tech specs to share, then see how this figure stacks up against other heroic Autobots and evil Decepticons